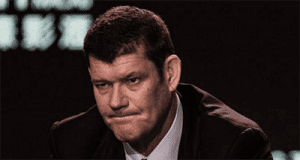 Among the 18 were three Australian citizens, including head of Crown’s international VIP programs, Jason O’Connor.

While it is illegal to advertise and promote gambling in mainland China, it appears the staff found a loophole, promoting its resorts instead of the gaming facilities. However, the group have allegedly still been targeted due to their plans to attract Asian high rollers to Australia. This could undermine Crown’s plans for the Barangaroo in Sydney due to the casino’s focus on bringing whales from overseas.

Mr Packer has released a statement on Tuesday morning commenting on the arrest, after an emergency board meeting on Monday night by Crown chief executive Rowen Craigie.

“As the major shareholder of Crown Resorts, I am deeply concerned for the welfare of those Crown employees detained in China,” he said.

“I am respectful, that these detentions have occurred in another country and are therefore subject to their sovereign rules and investigative processes.”

While Packer was silent on the consequences for the new casino, an industry insider has hinted at the implications for the $2 billion investment set for Sydney Harbour following this incident.

“Crown’s whole future is based around Barangaroo, and it is based on Chinese high-rollers,” they said.

“There are no slots.”

Member of brokerage and investment group Credit Lyonnais Securities Asia, Sacha Krien, also commented on the consequences of this arrest, noting whales from China might now hesitate in going to Australia.

“It may be that the Chinese government wants to funnel all VIP play through junkets where they potentially have more control,” he added.

Shares have already plummeted by 13.9%, marking more than $1.3 billion off its market value and reducing the worth of Mr Packer’s stake by $631.8 million.

While regular updates have been requested from the Department of Foreign Affairs and Trade, Mr Packer did not reveal whether they have been successful in gaining information on the group.

“I have sought regular updates on this issue and have asked Crown to do everything possible to contact our employees and to support their families, as we await further details from Chinese authorities,” he said.